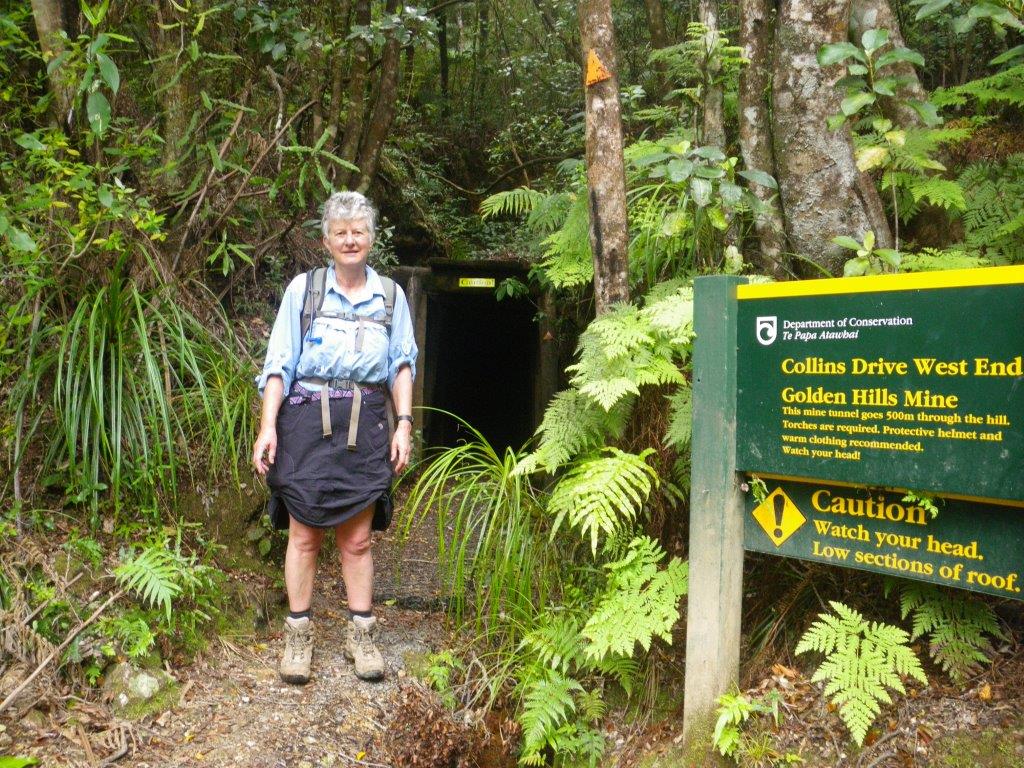 Just over a century ago, there was a gold mining town called Puketui beside the Tairua River, off the Kopu – Hikuai road at the base of the Coromandel peninsular.

Nowadays there is a DOC camp ground next to the river, but not much sign of the town. The gold miners on the other hand left plenty of evidence of their activities, in the form of numerous tunnels, benched tracks, and concrete structures where the stamper batteries crushed the rock.

We drove down on Friday afternoon, and found a pretty spot to park the van under the trees and overlooking the river. We had time for a short wander around before dinner, and met up with the camp warden who had recently taken up residence for the summer season. He asked if I had noticed the plastic tape near where we had parked, marking a danger area because of a large fallen tree hanging against another. I’m glad I checked it out and discovered we were far enough away, because there were some high winds during the night.

After a leisurely breakfast we set off in a walk up the Main Range Track to a lookout high above the valley. The hills behind me in the photo are the Pinnacles at the top of the Kauaeranga Valley.

We descended quite a way down the other side of the hill to the western entrance of Collins Drive, which runs for half a kilometre underground back to the Tairua valley. We had brought our head torches, but didn’t bother about helmets, which turned out to be fine until about 495 metres through when I neglected to “watch my head”, with the result that I now have a slightly painful lump on the top.

There were several side passages that have been boarded up because they are dangerous, one with a small hole through which we could see the rusting remains of a small rail trolley which would have been used to remove the ore. Apparently the miners did not find any gold in this particular mine.

The final section of our walk was along an old water race, which used to carry water from way up the river to drive the stampers. At times we were at the bottom of a deep ditch, and then there would be short tunnels through the cliff. In the photo, Felicity is standing in an open area between two of the tunnels.

We returned to the van for a lunch break, then walked back along the road and over the bridge to the other side of the river. A very well maintained road led up towards the old Golden Hills Battery. We saw one mine tunnel that looked as though it was still being used, and learned afterwards that a local company was mining here until quite recently. Unfortunately it seems that modern safety requirements (perhaps as a result of Pike River), have made it uneconomical for them to continue.

Further along the track we came across the concrete remains of the battery. This one was powered by coke gas, but there was not enough gold to make it profitable. The round concrete structure with the arches is the remains of the cyanide vat. I hate to think about where all the cyanide ended up when the mine closed!

We returned to the bridge and walked in the other direction to see the Broken Hills Battery. This one was water-powered, and produced 51,000 ounces of gold between 1899 and 1914.

A little bit further on we came to where the town used to be. There were a couple of short tunnels to explore, one which had dozens of huge cave weta. Some had antenna over 200mm long.

Another tunnel had the remains of a dead miner. Felicity diagnosed him as having a severe case of cow-bone disease.