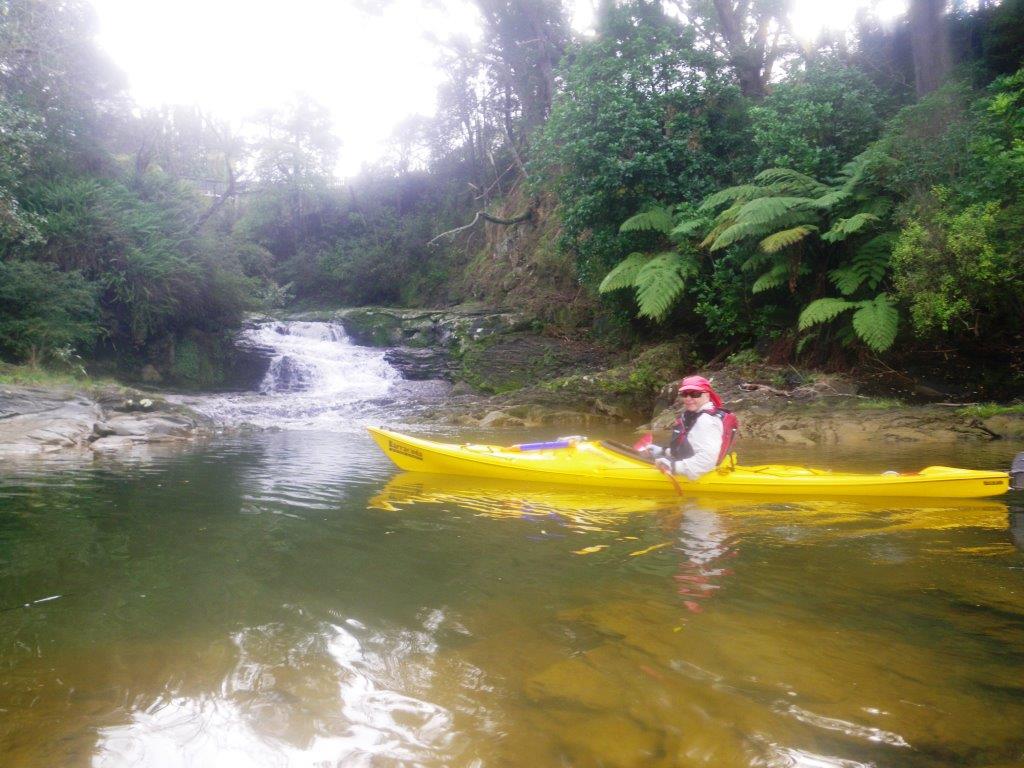 A full tide just before midday today meant that we were able to fulfil an ambition to kayak up to the Matakana market for lunch.

We began by driving to Sandspit, but when I saw the wind whipping across the estuary (and discovering we would have to pay to park), we backtracked to the boat ramp at Martin Road, nearer to the start of the river. It was a bit choppy at first, with the wind working against the incoming tide, but once we passed Tongue Point and entered the narrow part of the river it became a lot more pleasant.

We explored one small side creek, but it didn’t go very far. There were lots of grey clouds scudding across the sky, but we stayed dry throughout the trip.

As we passed the Matakana wharf, I could see we were subjects of several tourists’ photos. At the bottom of the waterfall we took a one of our own, then turned around and headed for the ramp.

When we landed and removed our life jackets, I decided to put on something warm to walk up to the market. I carry an old woollen jersey in a dry bag, but when I unpacked it I could see it had been a bit damp and there was some interesting fungi growing in it. Felicity said it looked like I had spilled my lunch, but I thought it looked even more like I had suffered a nasty bout of sea sickness, so I decided I had better wear a windbreaker over it before venturing out in public.

We were a little bit disappointed to find that our favourite stall holder was having the day off, so no Italian food for lunch. A (water) buffalo burger with blue cheese seemed like a good compromise, and it gave us an excuse to sample some of the delicious buffalo cheeses from the same stall. We had planned to buy some of their excellent mozzarella, but the woman told us that they aren’t selling it at the moment because the person who was making it for them quit and they need to go to Italy and learn for themselves before it will be available again.

When our burgers were ready we attempted to get back to the kayaks by walking up a track under the road bridge to the top of the waterfall. After a while of clambering over slippery rocks in our unsuitable footwear while balancing a plate of food in one hand, we realised that our plan needed modification, so we sat down and enjoyed the view of the river while we ate.

Fortunately all our kayaking gear was still where we left it at the boat ramp, so we changed our clothes again and set off down river. With the tide and the wind running in the same direction it was a lot more comfortable, so it was an easy paddle back to the car.