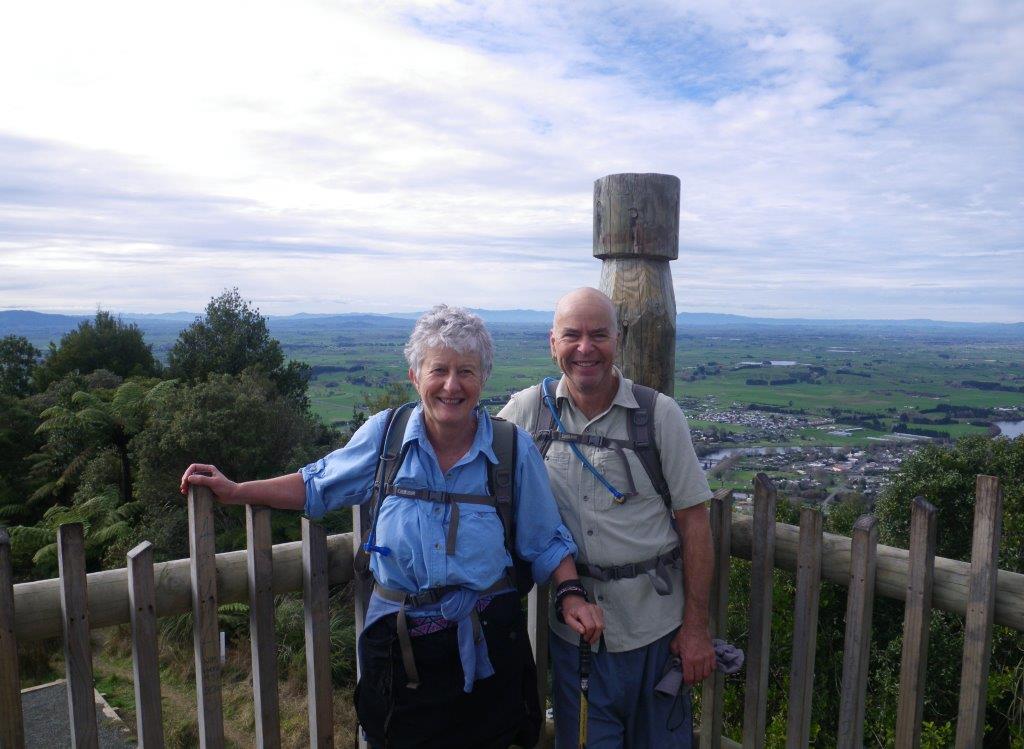 Judith had her last teenage party at our house on Saturday night, so Felicity and I decided it would be a good idea to be far, far away.

The temperature dropped noticeably as soon as we passed the Bombay hills; in fact I had to turn the headlights on for a while due to thick fog, even though it was midday. We turned off the main highway at Huntly, crossed over the Waikato river, and headed for Parker Rd at the northern end of the Hakarimata range.

After lunch in the back of the campervan we set off up a steep flight of steps into the bush. It was cold out at first, but after the first hundred metres of climb we warmed up and were able to remove our jackets. At the first lookout we had great views to Taupiri mountain in the south, and Huntly in the north – you can just see the chimneys of the power station behind me.

When we reached the top we continued on past the main lookout to a gap in the trees with a view to the south. Although they don’t show up in the photo behind Felicity, we had great views of snow-covered Ruapehu and Ngauruhoe on the horizon.

On the way back down, we followed a loop track through a Kauri grove. The big tree behind Felicity is apparently one of the largest in the Waikato.

When we got back to the van we had a cup of tea then drove a little further south to the Waingaro Hot Springs. I was expecting the pools to be chocka on a Saturday night, so I was shocked to see that they were empty. A small sign on the gate said “pools closed”. I was ready to drive elsewhere, but Felicity walked in and found that the campground was still open.

We drove to the top of the hill and found the owner Amro Singh, who told us we were welcome to stay and that we could have a free spa. The main pool area and many of the buildings were fenced off with security fencing. The pools were closed at the end of 2013 by the Waikato District Council because of concerns over safety. I subsequently discovered that there have been many negative reviews over recent years. Although the facilities are rather old and run down, I couldn’t see anything that particularly worried me.

The spa was very pleasant, the water was hot and clean, and the ferns on the edge of the pool had been cut right back giving us an excellent view of flowering gorse further up the bank.

Having discovered the missing piece of our campervan bed, and replaced the single duvet with a queen-sized one, we were warm and snug this time. We watched a movie on my tablet which worked quite well, although it was a little quiet.

We were just finishing breakfast when Amro turned up to collect $40 from us, which seemed a bit expensive seeing as how most of the facilities were unavailable. However she was very friendly and chatty, so our experience will not deter us from returning in the future.

Back near the beginning of the Waingaro Road in Ngaruawahia, we parked at the start of the Hakarimata Rail Trail. I was glad I hadn’t brought my bike because it is only 1.5 Km long. The walk along the side of Firewood Creek was very pretty, passing a wetland area which is being restored by DOC.

At the end of the flat section we started climbing up the hill.  We made a short detour to visit a small waterfall which might have been a place for a dip it was a hot summer’s day. From there the track continued steadily upwards until it reached a lookout platform at the summit, where we stopped for lunch.

We had passed a few other people on the way up, but the next section of the loop track, back down to Brownlee Avenue, was swarming with people enjoying the fine afternoon. DOC has spent a lot of money on this section of the track, building dozens of flights of wooden steps to protect the roots of the Kauri trees.

Near the bottom, we took another short side trail to see the remains of the old waterworks dam which used to supply Ngaruawahia. A sign claims that baby eels are able to climb the steep spillway behind me in the photo.

From the carpark it was a couple of flat kilometers along the road back to our van.