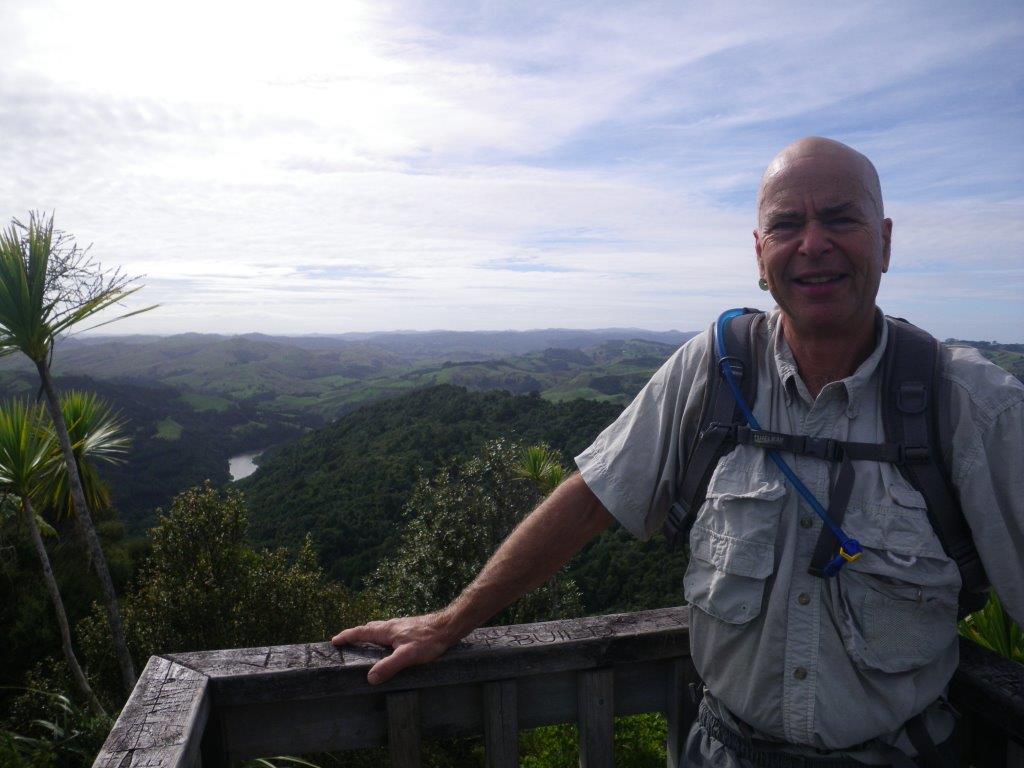 Years ago, Felicity and I dragged my boys to the top of Mt Auckland. Afterwards we retraced our steps to the car park on Glorit – Kaipara Hills Rd, and ever since then I’ve wondered what the other half of the Mt Auckland Atuanui Walkway was like.

I can now report it is very steep. We parked at the same carpark this morning, then tramped back down to the highway, which was very pleasant until we got there. The best I can say is that we endured the next 2km walking north on the shoulder of State Highway 16.

55 minutes after leaving the car, it was a relief to walk through the gate into the lower car park, where we checked out a very impressive modern long-drop toilet.

The walkway ran up a steep ridge, where orange topped posts lured us backwards and forwards across fences in random but relentlessly upwards directions.

When the paddocks ended and the Mt Auckland Reserve began, we immediately plunged into beautiful sub-tropical rain forest. The beech forests down south are certainly attractive, but if you’ve seen one beech tree you’ve seen them all pretty much.

The ground was littered with tiny, red kahikatea berries, and I kept looking around to see if I could see any the edible koroi were hanging low enough to pick and eat, but sadly, there weren’t. But the profusion of ferns and nikau palms and pururi and supple-jack and other sub-tropical plants made me reflect on how much more interesting I find the northern bush.

I could tell by the state of the trail that not many people walk the track this way, but it was easy enough, and only 300m climb. From the highway, it again took us 50 minutes took a couple of photos from the viewing platform then sat on the steps and ate our lunch. The plaited flax makes a nice display of spontaneous artistry.

We were just finishing when a German couple we had seen drive up Kaipara Hills Rd in a campervan emerged from the bush. Followed by a couple of teenagers, then an older couple and as we started down the track a group of four older women who seemed very relieved that they were near the top.

I enjoyed seeing some rata flowering in several places along the to ridge, and tasted a few of the red berries in the mistaken belief they were kei kie. We’re both still alive, so they’re not deadly poisonous at any rate. If anyone knows what the plant is, I’d be interested to know.

We were back at the car in about hour, although I’m sure we could have made it in 55 minutes if we had put our minds to it. The website suggests it will take three and a half hours to walk in and out from the upper car park, so this is clearly aimed at much slower people than us!