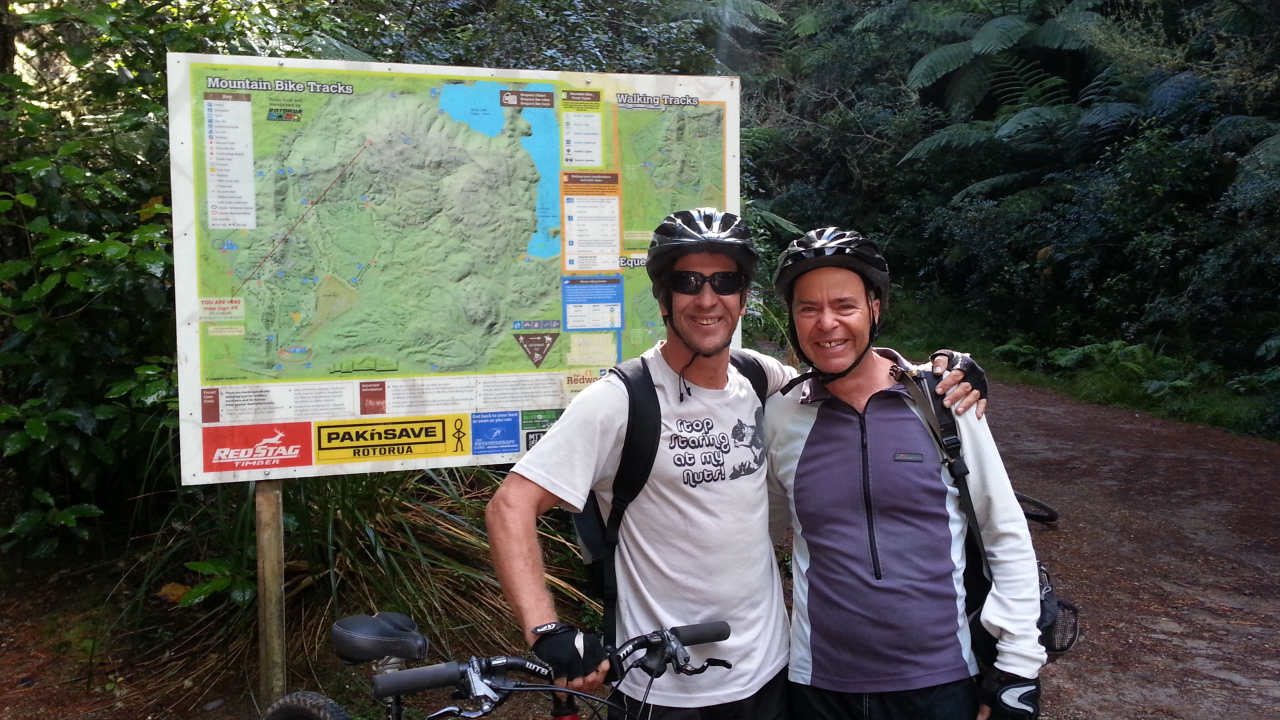 I spent last weekend introducing my eldest son to the thrill of riding a mountain-bike on the Whakarewarewa Forest trails at Rotorua.

We left Auckland about midday Saturday, so I realised it would a bit late to hit the trails after the long drive. Besides, I had read reports on the web of a trail network at Te Miro, about halfway between Morrisville and Matatmata. I had to consult my phone’s map a few times, and we got caught up in a road cycle race for a while, but eventually we arrived at the car park and set off.

We soon came to the club’s HQ, an old container. A couple of people were tidying it up, and I asked them if the trail had been funded. They told me that they are just starting to apply, but that mostly the building has been voluntary. They advised that we “go left” at the bridge and look for the Gobblers Knob track. It was fast and flow-y, with nice berms to ride up, and some exciting undulations.

After about an hour and a half of exploring, we decided not to complete the full round-the-lake mission, so that we would both be in good shape for a big day on Sunday. I was a bit disappointed when we arrived at the campground to find that the pump on the hot pool had blown up so there was only a cold pool available. The BBQ that we tried to use to cook our dinner was out of gas, with no spare available, but we managed to find another one a few minutes walk away, so that wasn’t a disaster. The place seems a bit run down, which is a shame because it is the nicest campground in Rotorua. I enjoyed hearing boiling mud going “plop, plop” just outside the van when I was going to sleep.

On Sunday morning we burst into action early, and were ready to go at the carpark soon after 9AM. There was a big crowd of guys waiting fkr the shuttle, but they had a full size bus running, in addition to the two mid-size buses.

The trails were surprisingly wet, with quite a few deep puddles to ride through. James coped pretty well with the grade #4 Billy T track, and only grumbled a little bit on the way up the long hill to Split Enz. By the look on his face at the bottom, I reckon he decided it was worth the effort.

We shuttled up a second time and rode down UnderBilly, then G-rock. After riding a couple more tracks tired muscles were starting to cause a crash or two, so we decided to head back down to the car.

The traffic was pretty heavy on the way back to Auckland, and at one point jusf before Huntly I had to brake suddenly and the car behind hit us. I was hoping that the young Indian driver had enough insurance to replace my two bikes as I walked back to inspect, but miraculously nothing was damaged. On my vehicle anyways, his front bumper had a round hole where the bolt of my bike rack had punched through while absorbing the impact. I also had to do some minor panel beating on my supplementary number plate, but otherwise all seems to be well.