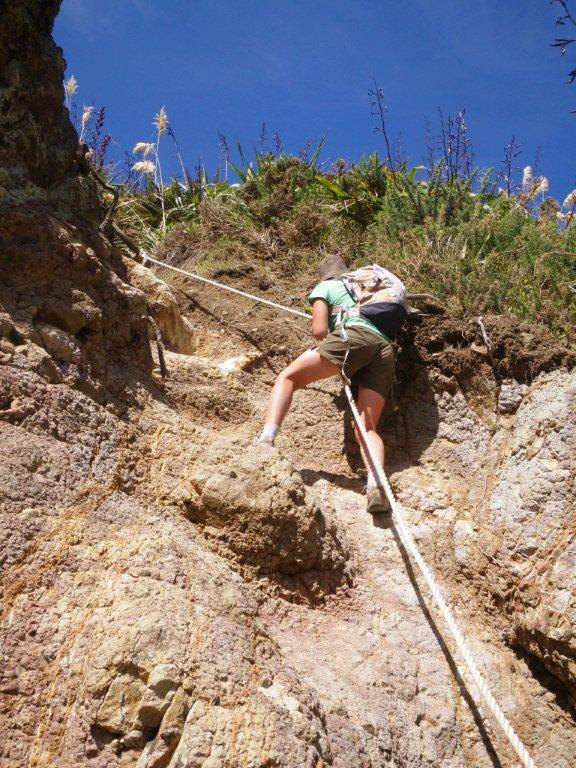 Annie the Canadian Te Araroa walker rang us on Thursday night from Orewa, so we arranged to meet up somewhere on the Okura walkway the next day.


I set off about 2.30 and ran all the way to Dacre’s cottage without finding her, so I was starting to worry that she had been unable to find a ride across the Weiti River to Stillwater. I crossed the creek and started up the steps over the final hill, and when I reached the top, there she was, photographing a nikau palm.

By the time we walked back to my car and drove up the hill to our house, it was 5.00 PM and Felicity and Judith were already hard at work preparing food for a colleague and his wife who were coming for dinner. We both pitched in, and 90 minutes later were sitting on the deck enjoying a delicious vegetarian meal with dishes from our new Turkish cookbook.

Annie probably thought she was going to have a rest day on Saturday, but when we told John and Nancy that we were thinking about a trip to one of the West Coast beaches, they offered to accompany us to Mercer Bay to collect mussels at low tide. Last time we visited this beach, which involves climbing down a steep cliff, the tide was coming in, making it too dangerous to walk through the cave to where the mussels live.

We started the day by driving out to Bethells Beach and walking up the river with our Boogie Boards to try sliding down the sand dunes. Judith had been out the previous week and reminded us that it is great fun. She didn’t tell us that we were supposed to lie on the boards face first, so the three of us endured some spectacular wipe outs until we figured out how to steer with our feet. Eventually we were able to zip straight across the stream at the bottom and on to the grass at the far side.

We were covered from head to toe with black sand by the time we were finished, so we drove down to the main car park and walked out to the beach to swim in the surf. Even though we were all thoroughly agitated for about 20 minutes, there was still about a kilo of sand at the bottom of our shower at home! On the way back to the car, we noticed a surf club sign informing us that it would be full rather than low tide at 5.00 PM, so we realised that mussels would not be on the menu for dinner after all.

It was after 1.30 by the time we got back to Henderson for lunch, and late afternoon by the time we arrived at the start of the Mercer Bay loop track at the top of the Piha hill. It took a little while to find the route down to the beach. When we last visited about 25 years ago there were several frayed and rotting ropes that you had to hang on to on the way down the cliff, so I was relieved to see they have recently been replaced.

It was a bit nerve-wracking climbing down because you can see that a slip could send you tumbling down hundreds of metres. There are plenty of places to hang on to though, including the ropes on the steepest sections.

It was great to be on a beach where your own footprints are the only ones to be seen. I ventured a few metres into the cave, but soon heard a big wave coming and got out quick. Climbing back up was much less scary and much faster.

So Mercer Bay at low tide is still on my bucket list. I’m a bit tempted to carry a tent down and camp on the beach next time we visit.

One thought on “Mercer Bay”