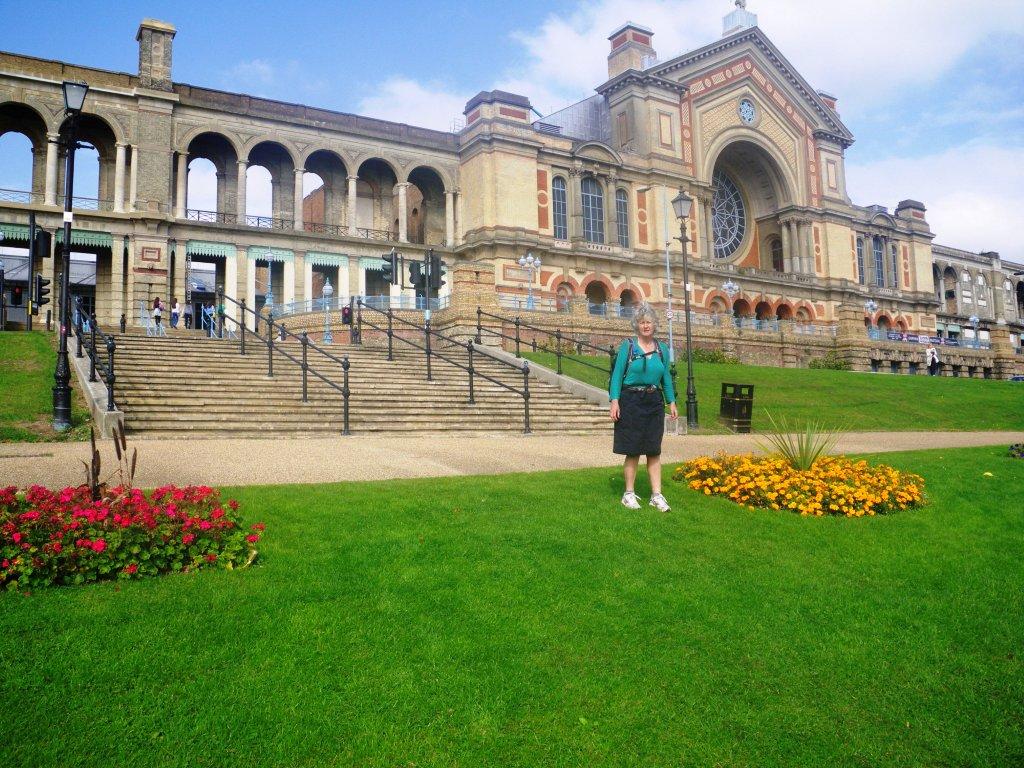 According to ‘Time Out’, the best farmer’s market in London is held on Sundays at Alexandra Park, so we decided to check it out.


The tube delivered us to Wood Green, to the east of the park, so we walked up past the common and across the New River to the Alexandra Park station where there is a footbridge over the railway leading to the park entrance. We started on a running trail through the bush at the edge of the grounds, but soon came to a grand promenade leading through ornamental gardens and past a fountain up to the palace entrance.

The building itself has obviously seen better days, although there are huge glass domes at each end which must create an interesting space inside. It isn’t,  as we supposed, a real palace at all; it was built in 1873 for an entertainment venue as a North London counterpart of the Crystal Palace in the south. Since then it has been known as the “People’s Palace”. Two weeks after it opened, it burned down but was quickly re-built. A notice on one wall informed us that it was used as an internment camp for Germans during WW1.

We poked our noses in the eastern entrance, but it is just an ice-skating rink that you have to pay to get in to. We walked around the side, past an old BBC studio and transmitting tower that claims to have broadcast the first ‘high definition’ television service back in 1936. It is a very impressive building, but most of it seems to be shut up and semi-derelict.

The western section is obviously better maintained. There is a cafe and a large venue for concerts, and exhibitions etc., but today it looked like it was being used for a private function. It would have been nice to explore inside, walk along the impressive colonnade, or climb up to the roof, but this doesn’t seem to be possible.

The views from outside the palace are probably the best in London. The hill up the road from our flat at Hampstead Heath is the highest point in the City of London (not counting the Shard building downtown), but the panorama today was much more impressive.

We continued on through the park until we eventually located the market. The Giggly Pig company had a huge range of sausages to sample, and succeded in selling us “three packs for a tenner”. There was a very interesting range of food for lunch; we settled on a Caribbean salt-fish ‘bockit’ (a hollow fried bread filled with fish salad and chilli sauce with a choice of 5 levels of hotness), followed by a Moroccan fish cake, chicken pastry and mixed salad which was one of the best meals we’ve eaten on our trip.

After all the food, we decided to try and walk home, and followed some alleys until we came to Highgate Woods. This is supposedly one of the last remnants of the ancient forest which covered the whole London area. Although it has been ‘managed’ for ages, the huge oak trees are very attractive and it was very pleasant. We came to the remains of a huge ditch across one hillside which may be prehistoric.

About that point Felicity’s foot started to hurt so we turned around and headed to the Highgate Tube station and home.