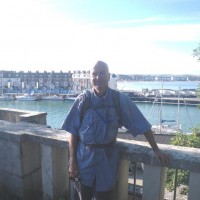 We spent yesterday in Southampton visiting the Mary Rose, Henry VIII’s flagship that sunk in 1545. I had seen a documentary about the discovery and raising of the ship in 1982, so was very interested now that it is on public display. The approximately 600 large oaks that were felled to build her came from the New Forest area where we have been staying.


I thought the ship was being continuously sprayed with water to stop the wood from turning to dust when it dried out, but I discovered that conservators have replaced the water with a kind of liquid wax, and are now in the process of drying it out. It will be finished in 2017, but in the meantime visitors can walk around the hull and look through windows. The ship itself is impressive, but I was surprised that they also recovered thousands of artefacts, which gave us a vivid picture of what life must have been like on board a navy ship 500 years ago.

Today we took a bus to Weymouth, and after dropping our bags where we are staying at a local pub, went for a long walk. We didn’t get back until after dark, so this post is going to be somewhat briefer than usual. This is a typical English seaside town, filled with mostly white, working class Brits and their families. As we arrived we stopped briefly to watch a traditional Punch & Judy show.

Our walk took us to Nothe fort, and on around the coastal path overlooking the bay where the Olympic sailing events were held. After a picnic dinner beside the fishing boats on the Quay side, we walked through the Radipole lake nature walk. This is an area of reeds and swamp near the end of the river Way, famous as both one of the landing sites of Roman invaders, then in 1348 the place where the Black Death (bubonic plague) first appeared in England. This wiped out 50% of the population, and it took 300 years to get back to the same numbers. I hope it’s gone now!