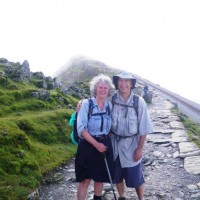 The weather looked a bit more promising this morning so we decided to go mountaineering. We hadn’t really planned to climb Snowdon, but since it is just up the road we realised it would be silly to waste the opportunity.


When the bus reached the pass it was drizzling,  but I could see for hundreds of metres,  in contrast to the same time yesterday when I could barely see across the carpark. I put on my poncho, but a kilometre up the Miners Track I was able to take it off as the cloud lifted. The first hour was very easy because the track was once a road into the Britannia Copper Mine. Some of the steeper parts even had concrete!

There must have been several thousand people on the mountain today. Lots of them had dogs, and there were dozens of small children, including a couple of babies in backpacks. Many overweight people we passed looked extremely distressed,  and way, way out of their comfort zone. Several were such an unhealthy colour we wondered if they were going to make it back down alive!

We saw a big pipe running down from a lake, and decided it must be the water supply for one of the towns below. Then we passed a parked Landrover and a small excavator at work, which explained why the track was in such good condition. After crossing a causeway between two lakes, we spotted a line of people zig-zaging up a steep slope ahead, and I began to think we were in for a real mountain climb after all.

We stopped for elevenses to get our blood sugar levels replenished before the climb. When we bought our fresh bread for lunch we also got a couple of Eccles cakes, mainly because I have read about them in my childhood and always wondered what they were. They turned out to be flaky pastry with currents inside – ideal fuel for climbing up a steep hill.

The second half of the climb was pretty unrelenting, but not technically difficult. We did pass one Indian girl freaking out about the height, but we saw her later on the summit, so she had obviously overcome her fear. We didn’t tell her it’s usually more dangerous climbing down! In total, we ascended just under 800 metres,  which is not terribly hard when you are only carrying a light day pack.

A few hundred metres from the top we  met the train tracks coming up from Llansberis. There are two trains running up and down, both fully booked, so the summit is crowded with both sweaty and exhausted climbers, and fresh, relaxed train passengers. The railway is very steep, and has a third rail in the centre with teeth so that a special ratchet cog on the train that will prevent it plunging back down if the engine fails. Despite this, when it opened in 1895, the first train crashed and a passenger was killed.

We took a couple of obligatory photos and found a small space amidst the crowds to eat our lunch. There was a bit of cloud about, but quite often the sky would clear and we could see all of North Wales stretching below us, right out to the Cardigan Bay on the coast.

For a bit of variety, we returned via the Pyg Track, named after a type of tar used in copper mining. We kept passing unfit climbers struggling upwards, and by mid afternoon became quite concerned about a couple of groups that clearly had no hope of getting to the top and back down again before dark. The average track times are three hours up and two down, but we took close to 2:40 in both directions because while we are fitter than most people, our ageing knees make downwards steps a bit painful.

I was glad to see the warden’s hut at the end of the track. A student doing a thesis on track signs asked to interview us and we agreed, even though we hadn’t actually read the sign in question. Apparently it said to watch out for the wheatear birds which hop around on the rocks, and although there is no picture on the sign, a Google search just now confirms we saw several.

It has been another tiring day, but we are both very glad “we knocked the bastard off” (to quote Ed Hillary).