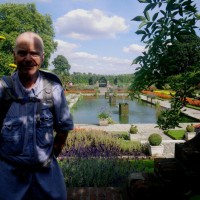 I’ve been trying to replace my favorite hat, which after many years of faithful service and several repairs is about to fall to pieces. It is in the washing machine now, and I’m wondering if it will come out in one piece. Problem is, every shop we visit has pretty much sold out of hats because it has been so unusually hot.


The hat in question is made by the Columbia lable, and Felicity found out they have a store in Kensington High St, along with just about every other big sportsware brand it turns out; even Kathmandu.  We tried several shops on the way to Columbia, with no luck, unless I wanted a pink hat with white spots.

Even when we showed the shop assistant what we wanted, he said they had nothing left. Then he talked to the manager, who made him shift a huge pile of boxes so he could unpack the one at the very back, which did contain similar hats but not exactly the model that I want. At almost £30 I’m not going to settle for something that is only close to what I want.

Down the road we found a discount store that sold me a hat that is not quite perfect but only cost £6, so it seemed like a good interim measure. We then started wandering eastwards to see what we could find. The church of St Mary Abbots had a funeral, so we didn’t go in, but we did enjoy walking through their cloisters, the church yard at the back, and the narrow alley back out onto the road. The graves we could see were relatively modern for London; 18th to 19th century. When I first arrived I might have been impressed.

Through a shopping mall, where all the poor locals have to drink is Starbucks or Costas coffee, then down another alley, we came to a sign that said “no cameras”. We wondered why. Then across the road I saw another couple of similar signs, and not far away a couple of police people. The police man was cradling a submachine gun, and looked like he was itching to take out disobedient paparazzi, so Felicity kept her camera securely in her pocket. It turned out we were at the entrance to Kensington Palace.

We joined hundreds of other tourists wandering around the attractive gardens. The palace itself didn’t look ancient enough to arouse our interest, so we passed by the entrance and went up the “wiggely walk” to the sunken gardens. With no trigger happy policemen in sight it seemed safe to take a photo.

For the next hour or so we walked through Kensington Gardens and into Hyde Park. The Serpentine was choca with people in paddle boats enjoying the sunshine. At the far end we found a memorial informing us that the entire lake was made by King George II in honor of Queen Caroline.

A little further on we saw an elaborate statue that at first I thought was a gold Buddha,  but when we got close it turned out to be the Albert Memorial, errected in his honor by Queen Victoria. Apparently she outlived him by about 40 years, and only wore black from the time that he died. The memorial is very fancy, but I’m inclined to think future Londeners will get more use from the lake.

It’s amazing how much parkland there is in this area of the city. We crossed the occasional road, but most of the way past Buckingham Palace and through the Admiralty Arch to Charing Cross we were under trees.

We made a detour to try and get a photo of St James’s Palace, but at the gate a policeman stepped out and told us very firmly that we couldn’t go any further, and that there is no point where we could see into the complex. Since he didn’t seem to be armed, Felicity tried to sweet talk him, but he clearly wasn’t going to let us past the entrance so we continued on down the Mall towards the tube and home.