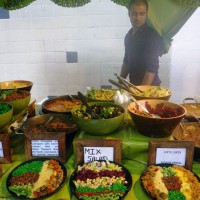 After spending all morning working diligently at our keyboards, we decided to reward ourselves with lunch at the Brick Lane market.


Even though some of the best Indian curries on the planet are found in the numerous restaurants along this road, we were both keen to try some Ethiopian food from a stall we had seen on our previous visit. For £10 we were able to purchase two plates with a sample of everything you can see in the photo, and I can tell you it was even nicer than it looks. It has been a long time since I ate so much that my stomach couldn’t possibly fit another bite!

The lane was crowded with people of every ethnicity you might imagine, and all the food stalls were doing a roaring trade. One side street had dozens of people sitting on the kerb eating, so we were lucky to find a table that had people just about to leave. We shared it with a couple of Spanish guys eating Venezuelan food that looked so good we’ll have to return on another Sunday.

On the way to Brick lane we had walked down Petticoat Lane, which was filled with exotic African people, but as we wandered north we came to a busy flower and plant market run by rough sounding cockney men. There was some excellent street entertainment from a four piece band.

After another couple of blocks we stumbled across the Hackney City farm, on the edge of Haggerston Park. There were all kinds of farm animals living right in the heart of the city. Beyond the farm we walked through a grove of dense bush, then around a small pond.

On the far side of the park, we saw a section of disused canal, now filled in and planted with grass. I figured it must have once been a branch into an industrial site, and that one of the main canals must be close by. Sure enough, we saw a sign pointing the way to Regent’s canal, so we decided to head down the tow path towards the Thames.

It was quite a long hike, but very pleasant in the warm sun. Felicity got to see a canal boat driven by three women traversing a lock; at least the guy with them was getting plenty of exercise running backwards and forwards opening the four gates. Further down the canal we saw a small market selling books, snacks, assorted junk and bike repairs, all from moored boats.

We also passed one edge of the enormous Victoria Park, which looks like it might need a whole day to explore. Next came Mile End park and eventually the Limehouse Cut where we decided it was time to head for home. This is another area we are going to have to come back to.

One thought on “Hackney and Tower Hamlets”