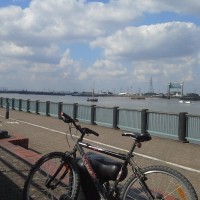 I’ve ridden my bike about 50 km today, on the Thames path heading east past Greenwich to the Erith Pier and back.


It took three trains to get there on the overground, but the transfers were pretty simple. I left the New Cross station, checked a handy map outside, and immediately headed in the wrong direction. Fortunately it only took me a kilometre or so to  figure out that the river was unlikely to be uphill, so it wasn’t long before I was out of the traffic and riding through alleys and backstreets towards the Thames.

The first section was retracing the path from Greenwich to Woolwich that I walked with Felicity a few weeks ago, but that satisfied my desire to see what it was like on my bike. We hadn’t walked around the peninsular with the O2 arena, so it was interesting to see the Emirate Airline London Cable Car stretching across the river, and the strange stainless steel  ‘tree’ next to the terminus. I’m keen to have a ride on it before we leave.

After the Woolwich ferry it was unexplored territory. I got distracted several times by ripe blackberries – there must litterally have been hundreds of kilos stretched along the river bank. I find it strange that there are so many people who can’t afford to eat properly while all this free food is going to waste. It may be that in a normal London summer they don’t get ripe properly.

I stopped for lunch opposite the huge concrete gate that protects the entrance to the river Rodding, watched a few boats pass by. There were a lot of industrial areas and wharf facilities, some which have clearly seen better days.

I came across a huge yellow excavator with a bucket dredging silt out of the river and loading it over the fence into a yard. The driver didn’t bother to even slow down, and just waved me past as he was scooping up his next load. I was so busy watching him that I rode straight through the middle of a big puddle he had created, and got covered in mud.

In the background of my last photo, of the pier sticking out over the mud, you can just make out the Queen Elizabeth suspension bridge on the horizon. When I turned for home at about 2:30, I realised that I would be cutting it a bit fine to complete my train journey before 4 PM, which is the latest you are allowed to take a non-folding bike.

So I took the direct 13 mile route along the road, which fortunately had a cycle lane marked all the way. There were a couple of tricky intersections where I had to suddenly morph into a pedestrian, but even in moderate traffic I was moving along faster than vehicles. I can see why cycling has become so popular in London.