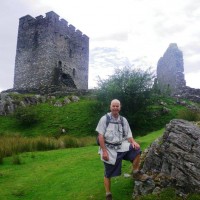 We decided we couldn’t visit Wales without seeing a ruined castle, so this morning we took a bus to the village of Dolwyddelan, where there is one built by a local king, Llwelyn the Great in 1210 -1240.


Wales had traditionally been a collection of small waring kingdoms, but in the 13th century this local Prince of  Gwynedd  managed to unite them all against the Norman invaders. He was probably the first genuine ‘Prince of Wales’, although he apparently didn’t use that title.

The castle isn’t huge, but one half is quite well preserved. We could see where the “short drop” toilet discharged outside the walls. Inside, the main chimney is still intact, and we were able to go up the stairs to the battlements on the roof. The castle commands a strategic position overlooking the Conwy valley below, but it was not particularly successful as a military base because it was captured by the English within a few decades.

We walked back into the village,  and checked out St Gwyddelan’s Church, which was moved from a nearby hill to its present site in the 15th century.  The local chief got fed up with outlaws robbing his house while he was at church, and by moving it, he could sit in his pew with his armour on and race out with his sword if lookouts raise the alarm. There is supposed to be a dragon which used to menace the village carved in one of the beams, but even when I got my torch out I couldn’t see it.

We spent the next hour or so following a very pretty lane between the river and the railway. After a while, the tracks disappeared into a tunnel cut out of solid rock, and our path turned into a woodland track. Eventually we came to a bridge with a sign pointing the way to Fairy Glen, our next destination. We subsequently realised that this was the way for cars, because after only a kilometre of riverside path, we ended up on the highway, which wasn’t really much fun. Fairy Glen turned out to be a private picnic spot that charged admission, so we gave it a miss and walked on past.

The only good thing about our mistake is that we got a close look at what must be one of the prettiest stone railway viaducts that I have ever seen. Both the river and the highway go underneath through magnificent stone arches. The stone masons must have been true artists to build such an attractive structure way out in the countryside.

After a brief stop for lunch on the edge of the river, we decided that since we had gained quite a bit of time by following the road, we could manage to fit in plan B, which was to visit a Neolithic tomb. This involved a long slog up a steep hill and a long trudge along a series of farm lanes and sometimes muddy tracks.

We were both a bit tired by now, and Felicity was getting a tad grumpy, so I started to get a bit nervous about my navigation, especially near the end when what was marked on the map as a dead straight line turned out to be a windy track. There were signs, but ‘diversion’ was not as informative as it might have been. I was very relieved when I saw the tomb ahead.

The site was once a Long Barrow construction, with a mound of stones and earth completely covering it. About 3000 BC it used to be a communal burial place, with a hidden entrance. The mound is long gone, and only one section of the roof remains. Up until a few decades ago, the local farmer used to use it as a sheep pen, when the historical signifiance was not fully appreciated.  I am always blown away to see something that old.

We continued on to the nearby village of Capel Garmon. This must once have been a thriving place, but now there are empty houses and the church has plywood over the windows. Even the local pub has shut up shop; only a light outside with “Bass” on it betrayed its previous existance. Away from the main tourist routes,  there are few jobs in rural Wales.

The final section of our trip was back down into the valley. Some of the track was pleasant enough, but long sections were badly overgrown and infested with blackberries and the occasional stinging nettle. At the bottom, we crossed the famous Waterloo iron bridge, which has an attractive thistle design cast into its spans.

This ended up being another eight hour walk, so now we are both rather tired, and Felicity has sore feet. When we finished our roast beef and Yorkshire pud at the local pub, I was worried that people would think she was pissed as she staggered out! Tomorrow we head back to London. I doubt if  any people manage to cover as much territory in four and a half days as we have done.

One thought on “Dolwyddelan Castle”