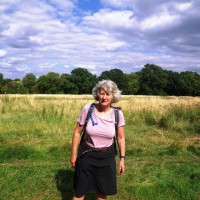 Today we took a tube and a couple of buses to the Moat Mount nature reserve on the outskirts of London, then walked home following the Dollis Brook.


Our bus driver was on to it enough to tell us to get off the stop before the one situated directly across the road from the start, because Barnet Way has six lanes of traffic and a fence down the middle. However, within a few minutes of entering the reserve we felt as if we were in the rural countryside. The path wends it’s way past meadows and fields, and we were able to pick and eat ripe blackberries as we went. We even saw a kestrel was gliding up and down the hedgerows.

The trail is 10 miles long, and nearly all through parks and reserves. Occasionally we had to detour down a suburban street for a few hundred metres yards, but then the trail would re-appear.

We stopped for lunch beside the stream, and I noticed a small animal swimming across a nearby pool. I tried to convince myself it was a water vole, but when I checked Google on my tablet I had to accept it was only a rat.

Many of the open spaces we walked through used to be pasture for all the horses that used to power London’s transport, but now that they are gone the area has become parkland. The councils don’t mow the grass in summer, so there are many wild flowers and other plants that provide habitat for wildlife.

As we neared the city, we saw more and more people enjoying the outdoors. We could tell from the abundance of yarmulkes that many of them were Jewish families enjoying shabbat. We met one other couple with backpacks like us exploring one of the long-distance walkways.

The greenwalk ends at Hampstead Heath Extension, which leads to the main Heath a couple of miles from where we live. I am still amazed by how much undeveloped open space there is in this city, and how many opportunities there are for enjoying nature.