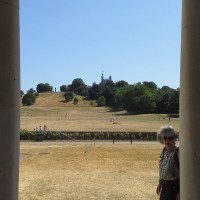 Felicity and I have spent a rather hot day exploring Greenwich, a part of London that I have not been to before.

I actually arrived yesterday morning, but after all night on a plane from Bangkok with no sleep I was only able to manage a couple of hour’s walk around our West Hampstead neighbourhood. I managed to stay mostly awake until about 9.30pm, so hopefully I’ll adjust to the different time zone quickly.

We started our day in the docklands area, and checked out a large area called Mudchute. Photos show that in the 70s this was basically a wasteland,  but now it is filled with mature trees and paddocks with farm animals for the city kids to see. They seem to be very paranoid about germs; everywhere we went there were signs directing people to use hand-washing facilities before eating.

We crossed under the Thames via a foot tunnel that only had a few minor leaks, nothing to get concerned about. The greenish dome on the right of the first photo is were a spiral staircase leads back up to ground level.

Nearby is the Cutty Sark, one of the fastest sailing ships built for the tea trade with China. It only made about 8 voyages before more  modern steamships made it unprofitable. It spent the next part of it’s life shipping wool from Australia. The ship has been beautifully restored, and has many interesting displays, one of which was a 19th century bike. I hope I find something a little more modern!

The old Naval college is just across the road, so we checked out a big dining room with a painted ceiling. It’s hard to imagine a modern artwork with so many naked young boys; I haven’t seen as many since I visited the Sistine chapel in Rome. I wonder what sailors and Catholic priests have in common?

We next visited an exhibition of space photographs, taken from earth based telescopes, the space station, the Hubble orbiting telescope, and from various spacecraft. There were interesting 360º panoramas from the mast of three Mars rovers.

The building next door is a chapel, underneath which is a collection of Navel paintings.

By this time it was lunchtime, so we sat under a tree and ate our sandwiches. The parks are full of very white people turning bright pink in the sun. The climb up the hill to the Greenwich observatory was hot but rewarding. I stood on the meridian line with one foot in the east and one in the west, but couldn’t be bothered standing in the long queue to get my photo taken. It wasn’t quite as much fun as standing on two different continental plates like I did on the Hollyford track down in the South Island of NZ.

The observatory is not a working example these days, due to the pollution from London’s street lights. It was interesting to learn about developments in time-keeping, needed to work out longitude when ships were sailing far out in the ocean. There is also a large collection of telescopes and navigation instruments.

We decided to  visit the planetarium to check out “the sky tonight”. By this time I was very glad to recline in a comfortable chair and watch the display of stars on the ceiling. This far north, and this close to mid-summer,  it is still  basically twilight at midnight, but fortunately the planetarium computer can turn the extra light off.

Its been an interesting and educational day.

One thought on “Greenwich”