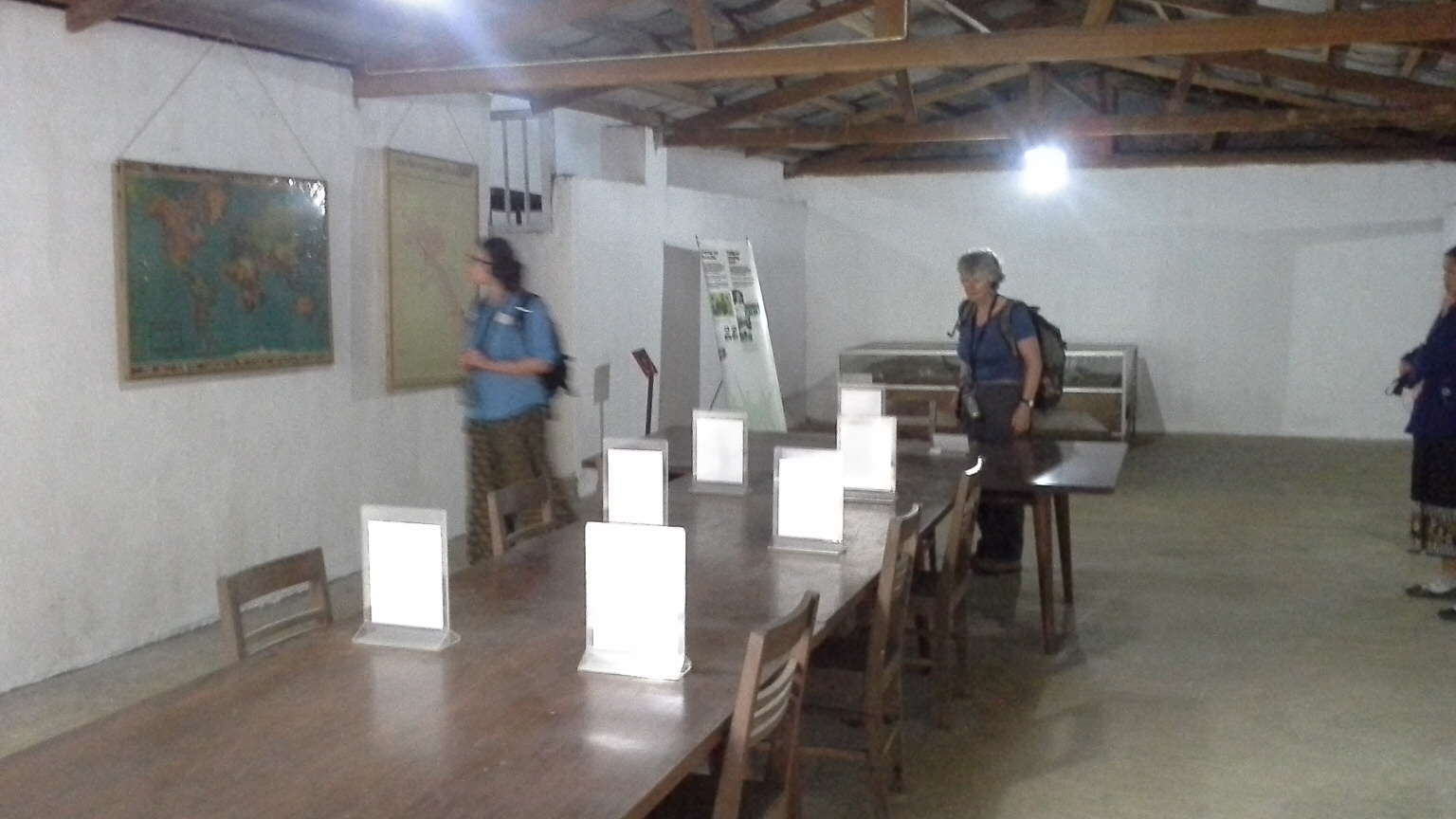 It took two days on a bus to get to Xam Neua in the far north-east of Lao, but it was worth it.

We could have done it in one long journey, but that would have resulted in arriving at 1am in the morning with a driver who had been on the go continuously since 9am, so it seemed a better idea to stop for the night half way. The local bus was quite comfortable, until a woman transporting a very rotten fish joined us. I was very glad to be sitting beside a window that opened!

We decided to stay her in the provincial capital rather than in the much smaller Vieng Xai town, so that we would have internet, and hopefully a wider choice of food. Judith was feeling a bit miserable with a cold, so Felicity and I checked out the tourist office about options for travelling the 25km to see the caves where the Pathet Lao government was based during the Indochina war. It turned out that there is only one guaranteed bus at 7am, and one fairly likely return bus at 2pm, so we were in for an early start. As we noticed in Hanoi, communist towns have loudspeakers which broadcast propaganda and patriotic songs from before 6am to about 9pm, so it was no trouble waking up.

We spent the rest of yesterday afternoon walking around the market, where we saw exotic food like rats, dogs, insects,  snails and frogs for sale. We also saw pigas for sale in tiny baskets which make sow crates look positively luxurious. On the positive side, there is a fantastic selection of green vegetables, many of which looked quite unfamiliar. We continued up the main road, and eventually found the two small stupas which are among the few structures that survived the American bombing.

The choice of restaurants turned out to be not as good as we had hoped – there are numerous roadside barbecues with delicious smells, but close examination revealed that they were mostly cooking lumps of pork fat, with little evidence of actual meat. In the end we ate a barely passable Chinese meal at a hotel next to ours, redeemed only by an interesting conversation with two other westerners whose table we shared.

It was too early to get any breakfast, or even a cup of tea before heading to the out of town bus station, and although we arrived in plenty of time, the best we could find to eat was a packet of biscuits and a few mandarins. At about 7.40, a songthiew (small truck with seats in the back) arrived, so we piled in and sat going nowhere until just before 8am. After stopping for petrol and a few drop offs and pickups along the way, we finally arrived in Viengxay just in time to miss the official morning tour at 9am. We ate breakfast at the only decent restaurant in town – run by an Indian guy – then walked down to the caves visitor centre and paid extra for our own guide.

Despite the almost total lack of consideration about how tourists might get there, or be accommodated and fed while there, the tour was extremely professional, and we were all very impressed. A nice path connects the most important parts of the huge cave complex, and electric lighting throughout made our torches redundant. We were given audio guides with 18 numbered stations to explain the history of the caves, which housed 20,000 people at the peak of the bombing.

Although Lao had a population of just over a million people at the start of the war, more bombs were dropped here than on the whole of Europe during the second world war! Most of the locals had no idea where America even was, let alone why they were being killed an maimed. Even now, an average of one person every day is killed by unexploded ordinance,  particularly small cluster-bombs which children find attractive.

The caves mostly had blast walls built in front of the entrances, and we saw several emergency rooms where the door could be sealed shut, and a hand pump could bring in air in case of gas attacks. Because the USA was never officially at war with Lao, the bombing was carried out by civilian pilots called the Ravens, and the planes were supplied by Air America, which was owned by the CIA.

The audio was obviously produced by someone with BBC training, and included numerous interviews with people who had lived and worked in the caves, plus sound effects which helped us imagine what it must have been like. One thing that surprised me was that the leaders of the Pathet Lao stayed united all the way through until independence, unlike the ideological schisms that featured in other revolutionary governments. By the end of the tour, when we listened to the sounds of happy people celebrating peace, we all felt like dancing and singing along.

We returned to the same restaurant for lunch, and ate another Indian meal. The food didn’t arrive till just before 2, so Felicity was getting a bit nervous about getting back, particularly as we had heard about a German tourist who got stuck for three days! Fortunately the restaurant owner spoke good English, and made a few phone calls to establish that the bus wouldn’t be leaving till 2.30. In the end, departure time was closer to 3pm, so we needn’t have worried.

Tomorrow we have another early start, and an eight hour bus ride to our next destination. Despite the difficulties in getting here, today has been one of
the highlights of the trip for me, and I’m as impressed with the Laotion war effort as I was with the Vietnamese when we visited there.

One thought on “Viengxay Caves”