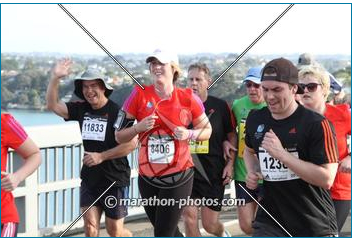 Felicity and I ran the Auckland Half Marathon yesterday. She pushed more aggressively towards the front before the start, but I passed her just after the 1km mark. My finish time was 2:19:10 and hers was 3:09:15, which I think rather impressive considering she did almost no training at all!

I hurt my foot a fortnight ago, so I had stopped training abruptly instead of tapering off as you’re supposed to. I kept riding my bike though, even though it hurt a bit. Then last Wednesday Susanne gave me her cold, so I was feeling pretty grotty up until Saturday.

So I wasn’t as well prepared as I might have been!

I felt good at 7.00AM when the race started in Devonport, and was comfortable all the way through Takapuna. By Northcote however, I was beginning to feel the strain in my muscles and joints.

I was still enjoying myself as I ran up the Harbour Bridge; it is such a great experience on foot instead of whizzing along in a car. Running down the other side took it’s toll though; by Pt Erin I was starting to hurt, and it was only just barely fun as I ran through Westhaven.

I had wondered if I would regret not entering the full marathon, but I was extremely relieved to be turning right towards the finish line instead of left towards St Helliers. I could see a couple of slow marathon runners heading out – considering they started 50 mins before me I reckon they probably had at least another three hours to go!

I tried to break into a sprint for the final stretch where the video camera is, but while I had plenty of energy and motivation, my right calf muscle started to cramp, and I was stumbling along barely able to stay upright as I crossed the line.

The photo of me on the Harbour Bridge includes a guy in a green shirt that I presume was blind.