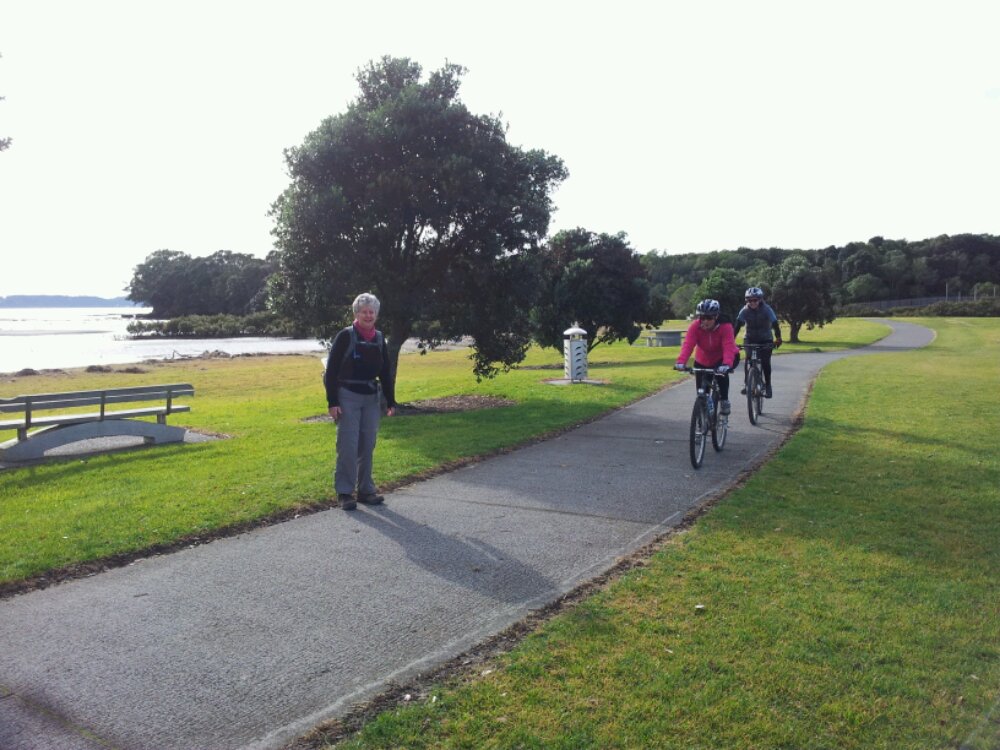 I had hoped to go kayaking today, but the tide was not favourable for our intention to explore up a river‚ so we decided to walk  along the coast south of Beachlands instead.

We parked the car in Second View Rd and set off about 10.30. There are a few loops along the way, and we took them all to make sure we got our money’s worth. The path is shared with cyclists‚ and we had to remember to walk on the left.

At Te Puru Park, which was filled with kids playing rugby, we stopped to check out a pou called “Nga  Hau E Wha” – the four winds. Then on across Kelly’s bridge to Omana Regional Park. The Kelly family were the original farmers in this area.

At Omana we strayed off the new pathway, and instead followed the grass track around the coastal cliff and down to the beach. After the park, we walked on the esplanade road to the end of the beach, then on to the final coastal track to the Maraitai Boating Club.

From the club, a final section of attractive board-walk leads to the beach. We walked down as far as the wharf, the end of which seemed like an appropriate destination. Because we had a packed lunch, we bypassed the cafe and headed back to the regional park, looking for a sheltered spot.

Down the end of the beach, we spotted a large dry piece of timber behind a pohutukawa that made an excellent seat for two. Out of the wind, the midday sun managed to compensate for the cool air-temperature, so we sat comfortably for half an hour or so eating our lunch.

We stuck to the walkway route on the way back, so we had a different view of the park.

The signs at each end of the walkway suggest it should take an hour and a half each way, but once you add in stops and detours four hours total is probably more realistic.

On the way down Second View Rd to the car we dropped down to the imaginatively named Shelly Beach, then climbed the stairs up to the hill-side path to the car park.

With no fussy daughter to feed, we stopped at the Mad Butcher on the way home to buy something offal for dinner. It was delicious.