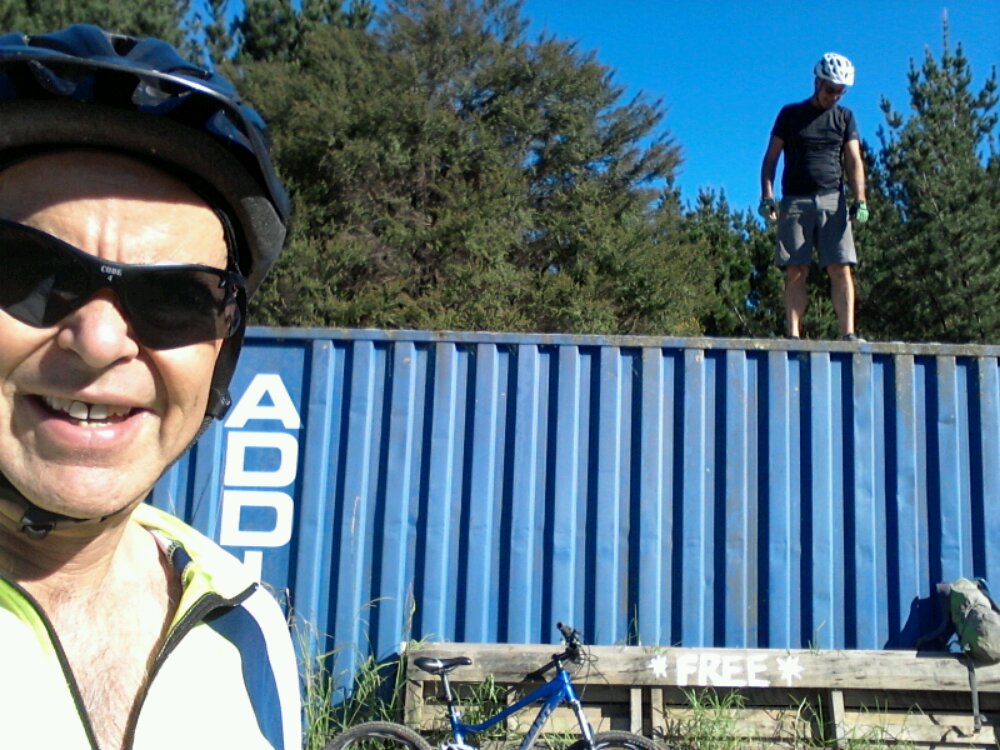 Our first mistake after leaving Kerry’s car at Maraetai Beach was to ride up the promising grass track beside the stream into the bush.

It was extremely pretty native bush mostly, but despite the repeated signs of other bike riders, it was soon apparent that it was more of a walking track. Eventually we were pushing our bikes up steep hills until finally we reached a road; obviously far to the west of where we wanted to be. Not easily discouraged, Kerry spotted another walking track heading back down towards the beach and charged down it. It was a beautiful, blue-sky day, and as I said, the bush was pretty, so spirits remained high.

Back at the beach, we found the road we knew lead to the forest entrance and rode up it. By now it was pretty hot; almost mid-day, so our ride up the metal road was an effort. I could understand why the local club runs shuttles up the hill!

We came to an intersection, and made our second mistake of the day by turning right and continuing around the base of the hill. We were encouraged by the number of bike tracks we saw, little realising that many riders enter the forest along this road because it is higher. Eventually the road petered out, and we turned around once more.

Somewhere along the way, Kerry turned into a well-used bike track heading into the hill. It became steeper and steeper, until we were pushing our machines up what was clearly a down-hill only trail. This tried and true method for reaching the top worked fine as usual, and a short trip up the road bought us to the container at the trig where the Pohutakawa Coast Mountain-Bike Club store their equipment.

By this time I was starving, so I enjoyed the slice of cold pizza I had carried up in my pack, even though there was no view. Another two riders turned up, and we asked one of them for suggestions about the best trail down.

The route we took was: ‘Skinny Dipping’ then ‘The Nile’, with ‘Ground Zero’ to finish. These tracks were graded 3, which was moderately challenging for us. A lot of effort has gone in to building berms and wooden structures to create jumps and skirt obstacles. It’s too far away to be a regular destination, but I’m sure we’ll be back one day.

Next to where we parked the car was a sign promoting a new shared path from Maraetai to Beachlands. Even though we were quite tired by now, the tide was in and the sun was shining and the trail proved irresistible.

This is a fantastic new development, which runs past Omana Regional Park, behind Te Puru park, and over the hills to Beachlands. A good place to take kids or novice riders.

We arrived back at the car at 4pm; just enough time to get back into town and over the Harbour Bridge before rush hour.