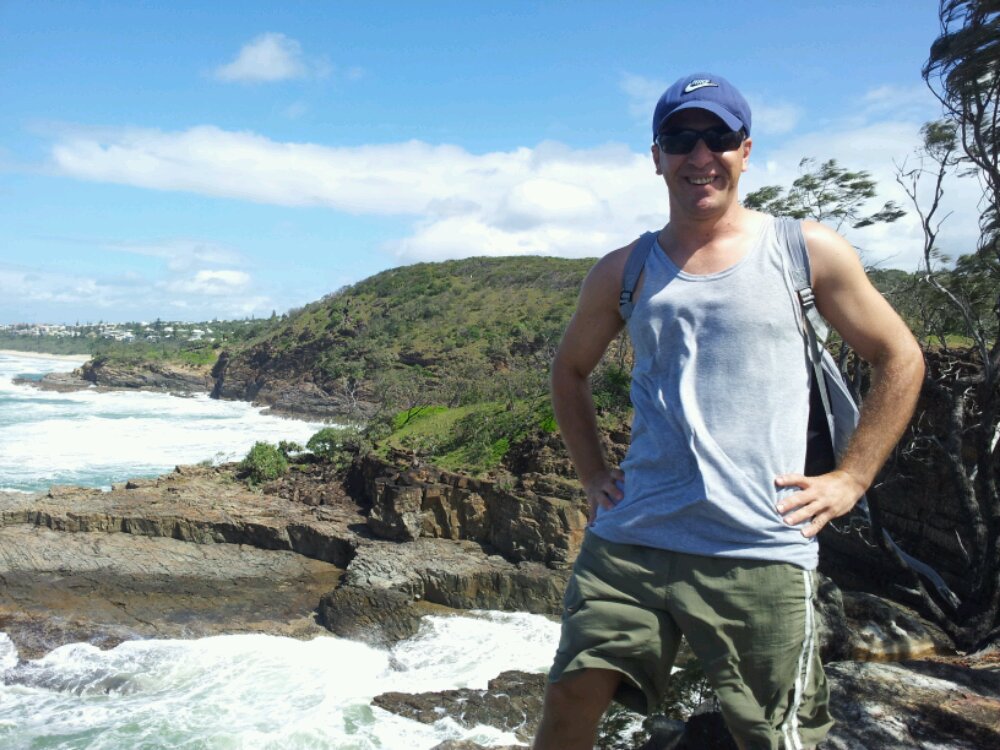 It was after 10 by the time we got ourselves organised and in to the park, by which time every carpark was taken, so we drove over to Sunshine Beach and found one of the southern entrances. This part is very dry, with sandy tracks and lots of Australian Grass trees. When we were here last time there had been a big fire and everything was black, but the forest has now recovered and turned green again.

The track lead us around the coast to the Devils Kitchen, where we watched the huge surf smashing into the rocks,  sending spray high into the air. The wind was so strong we could lean way over without falling.  As we walked along Alexandria Bay we could see a black cloud following us, and by the time we began climbing up to the headland at the northern end of the beach, rain forced us to put our coats on.

It didn’t come to much, as we were on the edge of the downpour, which Tomas told me was torrential in the town. After admiring Hells Gates, we sat on a bench above picnic cove and ate our sandwiches, then continued along the coastal track, watching surfers on boards and kayaks riding the waves.

When we got to the main park entrance we were lucky enough to spot a koala sitting up high in a gum tree. We waited for a while to see if it would do something, but it seemed to be asleep. I began to wonder if it was actually a stuffed toy for the benefit of all the tourists.

We headed back via the Tanglewood track, which passes through damp rainforest as it winds up the hill to the high part of the park. There are so many different environments in this park, so we had a great day’s walk.

By the time we arrived back at the apartment we were pretty tired, so the last couple of hours have been spent reading books and relaxing. Just before sunset I took a photo of some Lorikeets arriving home for the night.