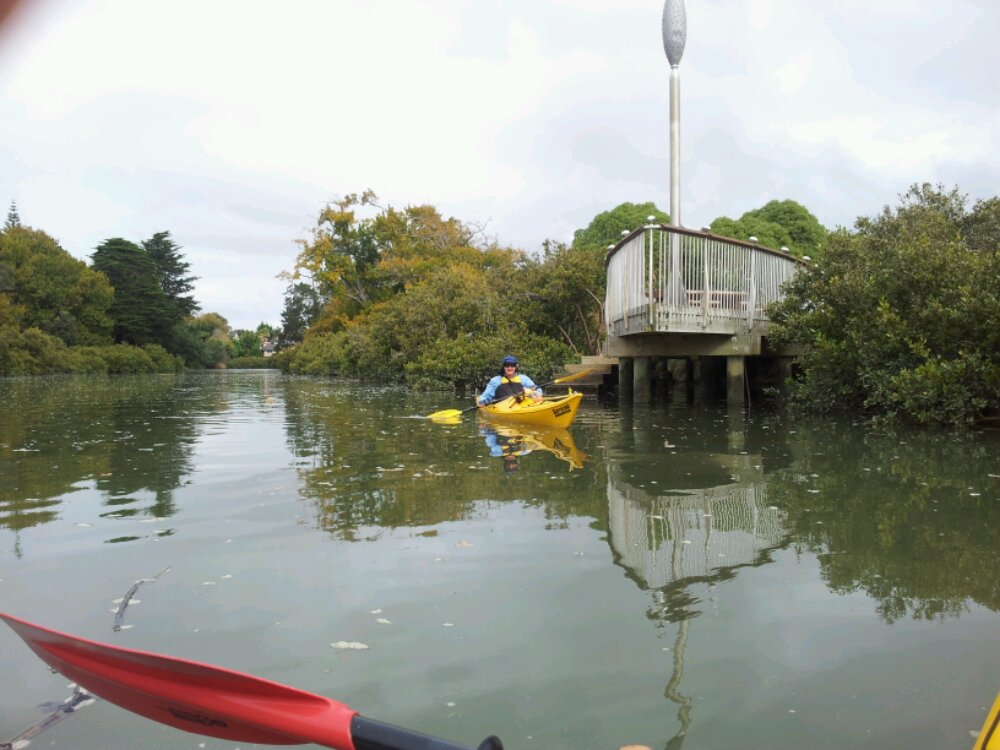 When an after-breakfast check of the rain radar confirmed my hunch the grey clouds were unlikely to amount to much, we decided to go for a kayak. On the way  down the road, Felicity consulted the map and reminded me that we intended to return and explore the main channel of Henderson Creek, which seemed like a great plan to me.

We parked just off the motorway at Lincoln road, where there is a handy concrete ramp into the water. By about 10.30 we were paddling steadily upstream with the incoming tide.

The deciduous trees are just beginning to turn red and gold; the view will be spectacular in a few week’s time. Palms and cabbage-trees, and even the occasional banana reminded us we are in the Pacific.

It must have been midday by the time we arrived in Henderson. We parked the kayaks and I waited with them while Felicity did a bit of hunter-gathering in the local Pak-n-Save. I could singing from a nearby church, and to my surprise realised I knew some of the words: “Onwards, Christian soldiers, marching off to war…”

On our way back down river, owe were twice overtaken by a guy on a racing kayak. The first time he came towards us, and advised me to make sure I kept left on blind corners (I think), but when he passed us from behind he shouted:

“Write in your diaries that you’ve paddled the same water as Ben Fouhy”.

I’ve since looked him up on the internet, and it sure didn’t look like we met one of the world’s fastest kayakers. Maybe a guy with a similar name gets a kick out of fooling tourists?

By 3pm we were back in the car with the kayaks on the roof. A very pleasant way of spending a Sunday in Auckland.

One thought on “Henderson Creek”