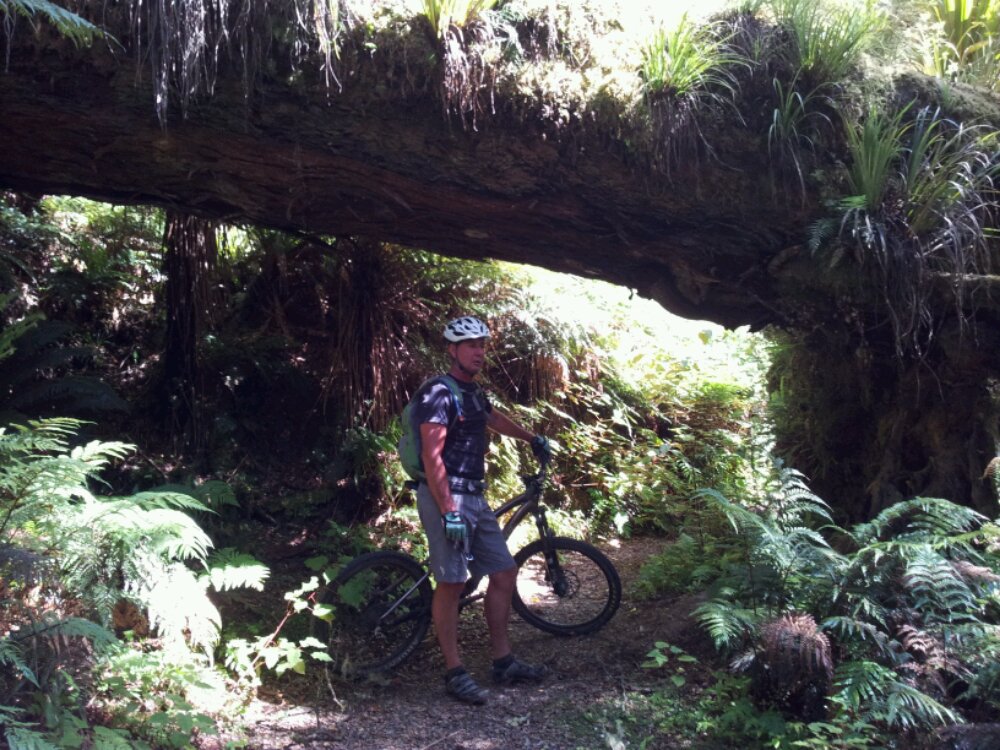 This morning we had a huge cooked breakfast ordered for 7am, because we planned to ride 38km across the Moerangi Track in the Whirinaki Forest.


Our shuttle driver Gary dropped us at Okahu Road about 8am, and we set off back to Minginui on one of the most scenic lengths of single-track I have ever been on.

There were heaps of huge Totara and Rimu towering over the Beech Forest. Kakas screached in the trees above us, and wood pidgeons flapped clumsily away as we came near then. After a mostly downhill ride, we arrived at Skips Hut and stopped for our first rest.

Then we climbed over the first serious hill of the day to the historic Rogers Hut. It is built from hand adzed Totara, and features a stained glass window.

While we were there a helicopter flew in and dropped a fencing wire cage in a clearing just down the track.

The next leg climbed steadily through more awesome mountain scenery high above the river, until it crossed a ridge and dropped down to Moerangi Hut.

By this time we were hot and sweaty, so we jumped into the stream to cool off before eating the roast wild pork sandwiches provided by Darline at the lodge.

After a bit of a rest we realised that we would have to hoof it if we were going to make it back for our 2pm pickup.

About a kilometre down the trail, Kerry remarked that it seemed a long 500 metres, which we expected would bring us to a DOC sign indicating the way to the road end. But the the trail was beautiful and I shrugged off his comment and continued on. But after another kilometre I realised that the nagging doubt in the back of my mind was growing, and we discussed the possibility that we were on the wrong track, heading deep into the Ueweras.

We decided we needed to be sure, even though we were under time pressure, so we rode back all the way to about 500 metres before the hut. There we found the sign that both of us had flashed past without noticing, right where it should have been, showing that we had indeed been on the correct trail.

The third trip through the scenic gorge was a bit more rushed than the first, but shortly after reaching our turn-around point we started on the longest climb of the day.

It would have been nice to have rested on top of Mt Moerangi. If we had we might have discovered we had cell-phone coverage, and could have rung Gary to delay our pickup.

But we raced onwards, flying down the long hill to arrive almost 45min late.

Gary must have forgiven us, because he served us an excellent dinner of roast wild pork followed by his famous pavlova.

What a fantastic day!

One thought on “Moerangi Track”