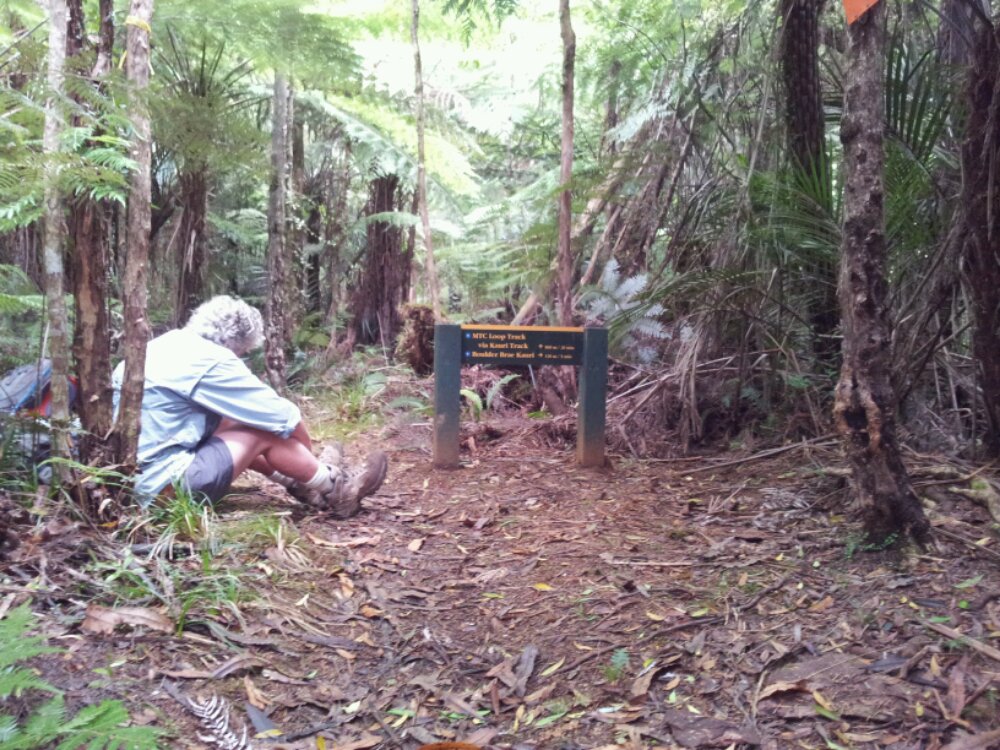 When I read a recent newspaper article that DOC was considering closing the Mataitai Forest to public access to prevent the spread of Kauri dieback disease, it immediately sprang to the top of my priority list to explore.

We made a brief stop at the Clevedon market to buy some venison salami and a couple of empanadas to eat, and sample some excellent farmed Captain Cook pork sausage that we must be organised enough (ie: chilly-bin) to buy next time. Great local buffalo cheese too – plus everything else you could need for a picnic.

We drove up the Ness valley till we found the car-park, and set off. Although both of us knew our boots were sparkling clean, we sprayed Trigene on them and scrubbed them religiously.

It would have been good if we had this map of Mataitai, but we only had the normal topo map that doesn’t have the tracks named. The tracks are very well marked and signposted at intersections, but confusing when you don’t know the layout.

We began walking clockwise around the MTC loop, then diverted on to Stream track. At the northern edge we jumped the fence and crossed the paddock to see the view – Moehau to the NE, Whitford forest to the North, and South Auckland to the NW.

We then continued on the MTC until First Ridge track which eventually lead us back to the Southern side of the loop. This meant a 40min trip each way to see the Boulder Brae Kauri, which was a bit of an anti-climax to tell the truth.

After finally eating our delicious sandwiches made with Felicity’s home-baked bread and last night’s leftover chicken we headed back down the hill towards the entry track.

I think it would be a pity to close this area off, seeing how much work has gone in to the tracks. Felicity reckons some of the kauri we saw are already infected, in which case it would be pointless.

I’m glad I explored the area; my curiosity is satisfied.

One thought on “Mataitai Forest”